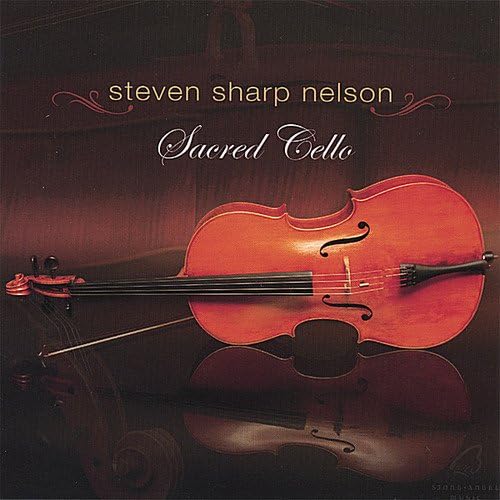 After a decade of performing with several of Salt Lake City's best known artists and having appeared on more than a dozen award winning albums, cellist Steven Sharp Nelson, moves into the spotlight with his first CD, released on the Stone Angel Music label created in 1999 by pianist Paul Cardall. Steven Sharp Nelson's Sacred Cello is produced by Paul Cardall and features classical arrangements of popular tunes like Clair De Lune by Debussy, Rachmoninav's Rhapsody on a Theme of Paganini, The Water is Wide, Bach's Cello Suite, Chorale, and many more. Several songs feature some of the artists Nelson has worked with previously including Peter Breinholt, Jon Schmidt, David Tolk, Marshall McDonald, and Paul Cardall. Steven Sharp Nelson began developing his musical talents at a very early age. His first composition, for percussion ensemble, was written before he could even read music. His skills and interests are rooted in the cello, voice, guitar, and percussion. Nelson's ability and style span many instruments and genres of music most aptly in classical, cultural, folk, and improvisational music. He has written many pieces for a variety of ensembles, and is most acclaimed for his works written for symphony, chorale, and for film. Among these works are 'Farewell,' a piece written at age 15, which was performed by the Utah Symphony, 'Supplication,' an a cappella piece written for the memory of 9/11 victims, and 'Spanish Trail Suite,' a nationally commissioned symphony commemorating the Old Spanish Trail. Steven Sharp Nelson is no stranger to the stage and is also sought after by recording studios. His cello sounds can be heard on over 100 different albums some of which have been at the top of the Billboard charts. He was deemed 'the best cellist in Utah' by KSFI FM100 and in 2004 he was nominated as the best studio musician of the year by the FCMA (Faith Centered Music Association).

Veteran studio musician Steven Sharp Nelson stepped out of a backing role and into the forefront with Sacred Cello, his debut effort. Having performed on over 100 albums previous to this inaugural solo project, he displays a penchant for improvisation even underneath a surface of meticulous precision. Nelson shows a mastery of tempo and dynamic contrast that evokes a surprisingly strong amount of emotion, even with what could be considered a familiar track list to classicists. There are no real surprises in the core lineup of hymns, but a stylish variety of classical and traditional work adds a sparkling flourish to the set. Among others, his unaccompanied rendition of the Prelude from Bach's Cello Suite No. 1 in G major employs a stirring rubato, while he commands a rhythmic bassline in Jesu, Joy of Man's Desiring. These departures from strict Sunday fare give the album a tremendous lift. Guitarist Peter Breinholt and solo pianists Jon Schmidt, Paul Cardall, David Tolk, and Marshall McDonald take turns serving as guest stars. They are merely icing on the cake, however; each in his own way complements the album's flavor, which ventures into new age, folk, inspirational, and classical. From start to finish, Sacred Cello is bright, solid, unique, and enchanting. ~ Jared Johnson, Rovi